Aisha & Aaliyah our miracle twins turned one December 16th. I still can't believe it's been a year but I'm so thankful they are both alive, happy & healthy. 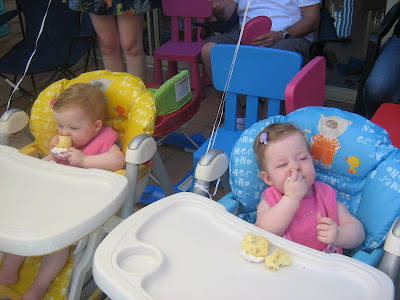 They had their 12 month immunisation on Tuesday & both had fevers on & off. Wednesday Aisha reached 39.1 was very irritable & not eating much. We just kept it under control with panadol. She was also having moments of rapid breathing. But she woke later than normal on Thursday morning, was very pale, limp & vomited yellow bile twice. She wasn't interested in eating or drinking & left her morning bottle & toast untouched. So we called our GP & she said to take her to the hospital. So here I sit in emergency hanging on to hope.

They took us in straight away. Her stats were good, sugar levels were perfect. They have been giving her fluids as she was dehydrated, and they want a urine sample but after 4 hours she still hasd't passed urine. Aisha had cream put on her arm in case they need to put a canular in. They also wanted to do a chest X-ray because of her breathing & she was coughing a bit yesterday & today. There was a slight mark on the films but they came back as all clear. 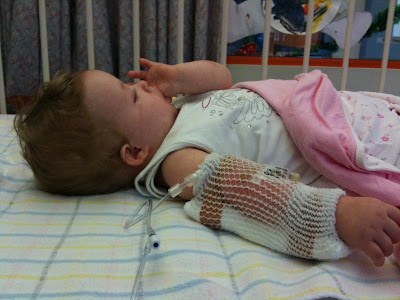 Towards the end of the day they decided they would put the canular in her arm. The Dr that did this made a real mess of Aisha's little arm after failing to find her vein in her left arm they eventually got it in her right arm, but not without lots of blood, kicking and screaming from poor little Aisha. Just as they got it in she did a wee, so we also missed our opportunity for a urine sample :(
She was stable, so the hospital let us go home on a gate pass, because we don't live too far from the hospital. They did want us to come back during the night if her condition worsened but otherwise we had to return in the morning for further monitoring.
So Saturday morning we took her in and this time they decided they wanted to admit her. They decided to hook her up to the drip and monitor her closely as she still wasn't eating or drinking. After having the drip in for about an hour she was getting very miserable, this was when I noticed her hand and arm was swelling. The vein had collapsed and the fluid made her arm swell, like she needed another thing to contend with. So the nurses took it out, tried to put it back in her left arm but when they wouldn't work they had to put a tube down her nose through her throat into her stomach. Aisha and her sister Aaliyah had been tube fed through their time in NICU and to see her struggling again just broke my heart. But it was for the best. We settled into our 'room' and waited for her to improve. 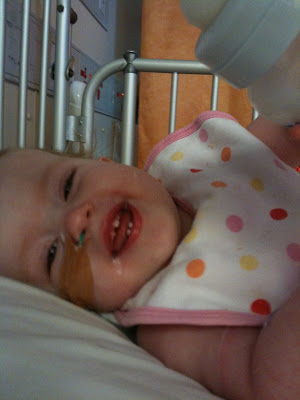 Sunday morning Aisha woke as a different girl, the bubbly, cheeky girl with boundless energy and a beautiful smile. Thankfully they let us go home later that day. They still don't know exactly what caused her to get so sick but think it was just a viral infection. Scary being in hospital not knowing what was wrong or how to make her better but so glad that she did improve and I like to think her big sister was looking out for her.
Posted by Unknown