Proud to be an Australian

I was shocked, and lost for words when I received two nominations for the 2011 Australian Of The Year Awards. These awards recognise outstanding and inspirational Australians in all fields of endeavour who make our nation a better place to live.

I received these nominations for the work I do with Yasminah's Gift Of Hope. One of the nominations came from a mum who I had helped after the loss of her child. It was incredibly moving to know that I had such an impact on her life that she felt I deserved to be an Australian Of The Year and honestly just blew me away! I made it through to the second round of nominations in my state NSW. One step before being a finalist! But I already felt like a winner just by being nominated. In my wildest dreams I would of never imagined I would be receiving an Australian of The Year Award. So THANK YOU Lili and Nicole for nominating me. It is a great honour and I have never been more proud to be an Australian 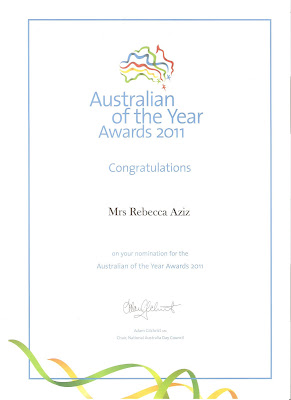 The tradition of recognosing the 26th January and the History of Australia Day began in the early nineteenth century when it was referred to as First Landing or Foundation Day. It began in NSW and over the years went from being acknowledged as a public holiday, to a National Event. In 1979 the Australia Day Committee was established and today Australian of The Year Award presentations are held across the country recognising outstanding contributions from members of the Australian Community.

Where ever you are Happy Australia Day!!!