Join us and help raise awareness

Saturday 17th November 2012 is World Prematurity Day and this year the National Premmie Foundation is again participating in the global campaign to raise awareness of the 15 million babies who are born too soon each year. Preterm birth accounts for more than 1 in every 10 live births. Approximately 23,000 of these babies are born in Australia and we want everyone to join the campaign to raise awareness of the issues these babies and their families face.

Pre term or premature birth, birth before 37 weeks gestation is the second leading cause of newborn death globally. Babies who survive an early birth often face the increased risk of health challenges such as breathing problems, cerebral palsy, intellectual disabilities and many other hurdles. For many families pre term birth brings with it neonatal or infant loss.

The National Premmie Foundation is a founding member group of the World Prematurity Network, joined alongside other like-minded organisations from around the globe to raise awareness and change the lives of babies born too soon.

How you can get involved

We are asking people throughout Australia to get behind World Prematurity Day.
In 2011, the Empire State Building was lit up purple and it will do so again in 2012 with other buildings from around the world.  This year in Australia, the Questacon building in Canberra, is lighting up purple.  You can be a part of our “light it up purple” campaign in Australia by purchasing a National Premmie Foundation candle and lighting it at 7pm in your own home.

• Visit and become a fan of our Facebook page http://www.facebook.com/nationalpremmiefoundation
• Change your profile picture on Facebook (the image is available below)
• Purchase your very own candle for our “Light it up purple” campaign via our online store
• Visit our Facebook event page and click “Join” and “Invite Friends”
• Join the official World Prematurity Day Facebook page and add your story of premature birth or neonatal loss
• Light your candle on Saturday the 17th November 2012 @ 7pm
• Donate online and support the National Premmie Foundation 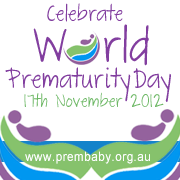 We invite everyone to help spread the word about the 17th November 2012. You can update your Facebook profile image and even your cover photo, place a WPD banner on your website or blog (linking to our website), share the link to our online store so your family and friends can purchase a candle and join in celebrating the day.

Why is there a World Prematurity Day?

Around the globe each year 15 million babies are born too soon, sadly around 1 million of these babies will not survive.

In 2008, the idea came about to raise awareness of the serious issues that these babies and their families face and since then the day has gained more and more support and each year has gone from strength to strength.

In 2009, the National Premmie Foundation joined forces with international groups, March of Dimes (USA), LittleBigSouls (Africa) and EFCNI (Germany) to raise awareness of the serious issues that these babies and their families face.

In 2010, the Foundation officially celebrated its first World Prematurity Day in Australia after moving our annual National Premmie Day celebrations from July to November in recognition of the world joining forces to make a difference.

In 2011 and 2012, further international groups, Bliss (UK) and Home for Premature Babies (China), joined the World Prematurity Network. United together, we can make a difference and raise the voice of prematurity in the public domain.

Please join us together with our member groups - Loddon Mallee Kids, Life’s Little Treasures Foundation, Preterm Infant’s Parent’s Association, L’il Aussie Prems Foundation and Yasminah’s Gift of Hope on Saturday the 17th November 2012.  Let’s make some noise, unite together and be the voice for all the children born too soon in Australia.
Posted by Unknown