Personally I love to be hugged. Some people love kisses, some like hugs, some prefer to shake hands. But I am a self confessed hug-aholic. There is no greater feeling than being hugged.

In our family we lovingly refer to hugs as squeezy hugs. They basically involve a warm embrace, with our arms squeezing each other tight ie squeezy hug.
Aisha and Aaliyah have only recently started giving us squeezy hugs. It is so wonderful when your children can start returning the love and warms my heart that they are now at an age where they understand. Aisha is just like me, loves giving and receiving hugs. She gives the BEST hugs she snuggles into your neck, rests her head on your shoulder and wraps her arms around you ahhh! I Just LOVE it! 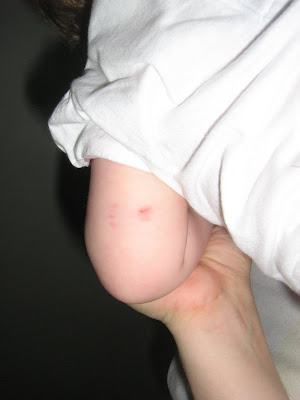 One other thing Aisha loves to do is bite :/ She most recently gave me what we have nick-named love bites, whilst giving me a squeezy hug. Ouch! Boy oh boy did it hurt! She sunk her teeth right into my shoulder, whilst her arms were lovingly wrapped around my neck. Aisha also likes to give love bites to her sister Aaliyah. We discovered Aisha had sunk her teeth into Aaliyahs arm. The evidence is right there and she even drew blood. Poor Aaliyah

Aisha and Aaliyah like any sisters have a real love, hate relationship. They can be the best of friends laughing and playing nicely with each other, then in an instant they are fighting over a toy, biting, pulling each others hair, pushing, kicking and climbing over each other. They share an amazing bond, two peas in a pod but their personalities are completely opposite! Chalk and cheese really.

Then there are haircuts! Zach has always had a problem with us cutting his hair, ever since I can remember. We have tried everything and even taking him to a barber didn't help. If you were to walk past our house whilst we are giving Zach a haircut, you would be mistaken to think he was in immense pain and being held against his will......well he kinda is. It is a military operation that involves me holding Zach in a squeezy hug so he doesn't freak out whilst my husband trims his hair with the clippers. We have tried bribery with chocolate, lollies, ice cream, cars, and toys and he will still scream, cry and carry on like we are hurting him and trying to cut off his head.
It's not his fault though, he has trouble dealing with his emotions and controlling his reactions to the world around him. You see Zach has some developmental delays that I wont go into a lot of detail about here, other than say that they suspect he has some form of autism, but can't make an official diagnosis as yet because of his age. He is 3 and a half, even though to look at him you would think he was 5 or 6.

It is still hard for me to believe that my affectionate, caring, bright, artistic, young man could be autistic, but I have had to learn to accept that there could be something wrong. He has been through a lot, and sometimes I blame myself, wondering if it was something I did or didn't do. Is it because I was too consumed in my grief for Yasminah at a crucial stage of his development. Have I failed him as a mother, and parent in not seeing that something was wrong sooner. He was always ahead of his peers in his development (yes one of those kids) he walked at 11.5 months, was saying lots of words then sometime after or before we lost Yasminah his vocabulary slowed down. The sad thing is I can't even pinpoint an exact time. Most kids his age can tell you their name, how old they are, where they live, and talk in 5-6 word sentences. Zach has only just mastered answering 'What is your name?' and we are working on 'How old are you?' but I suspect by the time he knows he is 3, he could be 4 lol so then we would need to start again.
The surprising thing is he has a thirst for knowledge and an outstanding long term memory of the strangest things. For example clothes he has received as birthday or Christmas presents, he can tell you when he got them and who they were from. So everyday when we are getting dressed I will hear 'nanna's shirt, Christmas' or 'mummys jumper, birthday'.

Then there is the iPhone - he picked this up the moment we got it and can use it like a pro, better than most adults and has even taught me a thing or too about it! We made the decision to get him an iPad as our developmental paediatrician recommended some wonderful applications we could use to encourage him to communicate with us and extend his vocabulary and help him understand the world around him. I have to say I honestly think it has helped. We have to constantly prepare him for new situations, places or people, otherwise it can be too overwhelming for him and cause him a lot of distress.

Which brings me back to squeezy hugs! When he gets distressed he likes squeezy hugs. I have read somewhere that children on the autism spectrum like to be held tight and enjoy firm overall pressure. This is a whole new world to me and just like being a mum to an angel, having a child on the autism spectrum is like belonging to a club no one asks to join...........We will just keep taking it one squeezy hug and haircut at a time
Posted by Unknown